Plasma and the Emergence of the Cosmos

Plasma and the Emergence of the Cosmos

The structure of the cosmos, as understood by modern science, was discovered through the many explorations detailed observations revealed through the now-famous Hubble telescope.  While it was once thought that the cosmos was synonymous with our own galaxy, the Milky Way, what Hubble revealed is an immense universe of billions upon billions of galaxies.

Modern cosmology is based on what is generally called The Standard Model, which holds that the primary unifying force and organizing principle underlying the entire universe is gravity, first identified and formulated by the great Sir Isaac Newton.

Modern cosmology’s dominant view of the origin and development of the universe is called The Big Bang.  This theory argues that over 13 billion years ago, from an infinitesimal speck, the universe sprang into its current immensity and heterogeneous complexity almost instantaneously, through a series of expansive phases, becoming the universe we observe today.

Sometimes this illogical view is expressed in words such as: ‘In the beginning there was nothing.  Then nothing exploded into everything.’

Almost 14 billion years ago the big bang exploded the universe into life, from a region smaller than the size of an atom to the universe in a matter of seconds, from nothing to everything. –
From the YouTube video: ‘From Nothing To Everything – How The Universe Works‘,  Published on Jul 7, 2010 by Discovery UK

One expert and critic of the Big Bang, presenting the theory, asserts how widely held among modern cosmologists is this view of the origin of the cosmos.

Cosmologists nearly all agree that the cosmos came into being some ten or twenty billion years ago in an immense explosion, the Big Bang.  Our mighty universe, they believe, began in a single instant as an infinitely dense and hot pointlike ball of light, smaller than the tiniest atom.  In one trillion-trillionth of a second it expanded a trillion-trillionfold, creating all the space, matter, and energy that now make up the galaxies and stars.  – from the book The Big Bang Never Happened,  in the chapter entitled, eponymously, ‘The Big Bang Never Happened’,  Chapter 1 page 11 by Eric J. Lerner, Vintage Books, 1991.

When asked ‘What caused the Big Bang,’ we are often told by cosmologists that there is no answer, since causality could not have preceded the origin of the universe via Big Bang.  Here is an example of such a premise, offered by modern cosmology:

The question of what caused the Big Bang is one of the most difficult facing humanity. We may never find an answer, and even if we do, we probably won’t understand it. It’s difficult to imagine an event occurring without a cause, and yet, that is precisely the prospect we are faced with when it comes to this question. — from ‘What Caused the Big Bang‘ a YouTube video from Deep Astronomy. Published on Jan 8, 2011

Unfortunately, the Big Bang is plagued with many paradoxes and contradictions, leading, among other tactics, to its having to introduce ad hoc hypotheses regarding the wide-spread galactic distribution of such dubious existents as dark matter, dark energy, black holes and the homogeneity of the early universe.

The Electromagnetic Plasma Theory of the Cosmos

Based on research ranging across such diversified disciplines as astronomy, geology, subatomic physics, molecular biology,, microbiology and neurobiology, a new cosmology is emerging; a cosmology based on the premise that the primary unifying force permeating the universe of things is electromagnetism.

Eric Lerner, currently President and Chief Scientist at Lawrenceville  Plasma Physics, Inc. DBA LPPFusion, tells us about this new and important movement in cosmology, a movement itself originating as far back as the first quarter of the 20th century, which, in contrast to the mathematical rationalist driven theory of the Big Bang, ‘offers an entirely different concept of the universe’, an empirical, laboratory driven theory based on the foundations of Plasma Cosmology:

But now an entirely different concept of the universe has developed, although it is not yet known to many astronomers.  It begins from the known fact that over 99 percent of the matter in the universe is plasma—hot, electrically conducting gases.  (In ordinary gasses, electrons are stripped off by intense heat, allowing them to flow freely.)  Extrapolating from the  behavior of such plasma in the laboratory, plasma cosmologists envision a universe crisscrossed  by vast electrical currents and powerful magnetic fields, ordered by the cosmic counterpoint of electromagnetism and gravity. — from The Big Bang Never Happened, 1991, page 14.

What follows below is an overview of Plasma Cosmology, its key ideas, prime movers, and its fundamental perspectives that provide the foundations for a new theory of the emergence of cosmic phenomena underlying the universe.

What is most powerful and significant about plasma, is that it is in fact a fourth form of matter (solid + heat -> liquid + heat-> gas + heat + electricity -> plasma).  Plasma exhibits properties unseen in the other forms of matter.

Plasma is an emergent form of matter in that it spontaneously organizes itself into a cellular, nodular, electro-chemical substance.  Formed as Plasma Sheets or Double Layers.  This special cellular form of electro-magnetic matter is essential to the concept of Plasma.   It was first given the name plasma by the physicist, Irving Langmuir, due to its resemblance to fluid plasma in the bloodstream of vertebrates (including man).

How Old Are the Ideas of Plasma Cosmology?

One may reasonably ask Why the electric nature of the universe took so long to discover? The answer is that the electric nature of the universe was originally a theoretical assumption formulated in the mid-nineteenth century.  In those days it was not possible to directly see  (e.g., through telescoping observation) the electromagnetic substance, plasma, filling much of the universe.  That is because to see electromagnetic phenomena through telescopes required the use of long- and short-wavelength filters, in the infrared and ultraviolet ranges.  The use of such filters, especially on extra-terrestrial telescopes (such and the Hubble and the COBE) revealed dramatically the pervasive presence of plasma substance throughout the observed universe.  See, for example, the excellent YouTube video of the Hubble Telescope entitled ‘Hubble: Universe in Motion‘,  and its amazing views of the cosmos.  Below is a screenshot from that video, selected at time 2:40 because (although not mentioned in the video)  the Hubble image captures a key concept of plasma physics: the emergence of the (nested spherical) double layer state.

This phenomenon of plasma double layers can be experimentally created in the laboratory.  I highly recommend that you see the full presentation of the SAFIRE project, captured in the video titled ‘The SAFIRE Project 2017-2018 Update‘.  Here is a frame capture from that video at time 24:28 illustrating plasma spherical double layers: 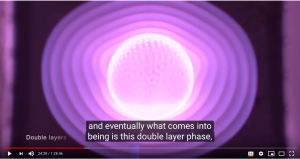 Plasma cosmology is a new approach to cosmology founded on the work of Kristian Birkeland, a Norwegian physicist.  Birkeland famously summarized what was to become known as ‘the electric universe concept’:

It seems to be a natural consequence of our point of view to assume that the whole of space is filled with electrons and flying ions of all kinds.

We assume each stellar system in evolution throws off electric corpuscles into space. It is not unreasonable therefore, to think that the greater part of the material masses in the universe is found not in the solar systems or nebulae, but in ‘empty’ space. –
Kristian Birkeland quote 1913

He is probably Norway’s greatest ever scientist, and many of his works are still used as reference materials. The electric currents that flow from space are named after him — Birkeland currents.  He is recognised for bringing Plasma and Electromagnetism into Cosmology, but while many of his ideas are widely accepted, his cosmological theories are less well known. He died aged 49 just when a working committee was in the process of nominating him for the Nobel Prize in Physics. – from Plasma Cosmology.Net

Irving Langmuir (1881-1957), an American physicist, was the first to call this new form of matter plasma, which was inspired by the idea of human blood plasma, a fluid manifesting cellular form, where its component elements were wrapped in electrical membranes, allowing them to remain separated and not neutralize one another. Langmuir was the first non-academic to be awarded the Nobel Prize for his work in 1932.

He discovered Plasma Sheathes, now called Double Layers, having observed the electrons and ions of a plasma separating during experimentation.  DLs are one of the most important features of plasma behaviour.

He also defined and explained the term ‘valence’ as part of his description of the atom. Few textbooks, however, recognise the influence that Langmuir had on the development of our understanding of the nature of the atom. – from Plasma Cosmology.Net

Plasma cosmology today is most strongly associated with the work of Hannes Alfven (1908-1995), a Swedish physicist and author of Cosmic Electrodynamics (Oxford University Press in 1950), who won the Nobel Prize in physics (1970) for his work in plasma physics.   For those who are not familiar with Hannes Alfven and his work, here are his scientific credentials:

Alfven’s lifetime achievements earned him worldwide recognition- including the Gold Medal of the Royal Astronomical Society (1967), the Nobel Prize in physics (1970), the Gold Medal of the Franklin Institute (1971), and the Lomonosov Medal of the USSR Academy of Sciences (1971). Several academies and institutes claimed his name in their membership rosters: the Institute of Electrical and Electronics Engineers (life fellow), the European Physical Society, the Royal Swedish Academy, the Swedish Academy of Engineering Sciences, the American Academy of Arts and Sciences, and the Yugoslav Academy of Sciences. Alfven also was one of the very few scientists who are foreign members of both the U.S. and Soviet Academies of Sciences. – Hannes Alfven (1908-1995) a tribute by Anthony L. Peratt Physics Division Los Alamos National Laboratory, published online in the Cosmology section of  The Millennium Group

“We should remember that there was once a discipline called natural philosophy,” he said in 1986. “Unfortunately, this discipline seems not to exist today. It has been renamed science, but the science of today is in danger of losing much of the natural philosophy aspect.” – Hannes Alfven (1908-1995), a tribute by Anthony L. Peratt

The Middle Way: Modern Emergence Theory and the Cosmos

R. B. Laughlin argues that all physical laws are emergent and hierarchical, manifesting themselves only within large self-organized systems.

How can this be? The answer is that these properties are actually caused by collective organizing principles that formally grow out of the microscopic rules but are in a real sense independent of them. – from ‘The middle way’ by R. B. Laughlin, et al, 1999, page 32.

The laws of nature that we care about, in other words, emerge through collective self-organization and really do not require knowledge of their component parts to be comprehended and exploided. – from  A Different Universe: Reinventing Physics from the Bottom Down by R. B. Laughlin, Basic Books, 2006, p. x1

The Electromagnetic Plasma Theory of the Cosmos is predicated on the observation that laboratory models of plasma phenomena are scaleable from the terrestrial to the cosmic realm.   In an important theoretical paper on emergence in the physical world, R.B. Laughlin et al. have written:

In any event, the applicability of the science of mesoscale organization that we believe can be developed will not be limited to the world between angstroms and centimeters. Organization following similar principles may well be manifested in astrophysics. As we have noted, complex structures already have been proposed for the exotic matter expected in neutron stars, while ideas developed to explain mescoscopic organization on Earth may be useful in explaining the origin of large-scale structure in the universe. – from ‘The middle way’ by R. B. Laughlin, et al, 1999, page 37.

Validation of the Electric Sun Model: The Safire Project

Some Related Sites and Papers:

1 Response to Plasma and the Emergence of the Cosmos

This site uses Akismet to reduce spam. Learn how your comment data is processed.